Bobby Shmurda Lawyer Says they should have Bailed Him Out (news) 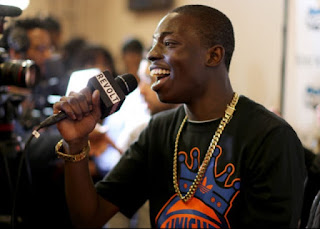 RELATED ARTICLESVine Killed The Radio Star: Examining The Platform's Creation Of Rap Phenoms Vine Killed The Radio Star: Examining The Platform's Creation Of Rap Phenoms Earl Sweatshirt "Devastated" By Sony's Mishandling Of His Album's Release Earl Sweatshirt "Devastated" By Sony's Mishandling Of His Album's Release Stream Miguel's "WILDHEART" Stream Miguel's "WILDHEART" Bobby Shmurda's lawyer says Sony Music should have bailed him out of jail. Kenneth Alexander, attorney to Bobby Shmurda, told Doggie Diamonds in a recent interview that Sony Music should take care of his client's $2 million bail. "They didn't want to come in and make a bail for this young man," he said. "They wanted to capitalize on the energy that he had, but they wanted no parts of getting him out." Shmurda has expressed his desire to get of his deal with Epic Records, a division of Sony Music, as far back as February. Montgomery lamented that other rappers have shown little support for Shmurda beyond the occasional "Free Shmurda" blast on social media. "These rappers aren’t millionaires," he says. "They’re personalities and brands and that’s all they are." The above claims are to be expected from Shmurda's attorney, but Montgomery was nevertheless eloquent as he discussed what he believed to be the exploitation of his client. "It is my opinion that Ackquille Pollard aka Bobby Shmurda was made an example of," Montgomery said. "He represents a certain energy that is everywhere in this American space, I think even four corners of the Earth where you have black men who have very little resources and opportunity and they're taking advantage of what is available to them. I think he was made an example. Whenever you have a prosecutor send out pressers before they make an arrest and a perp walk, then there's something else going on." [via Hip HopDX]