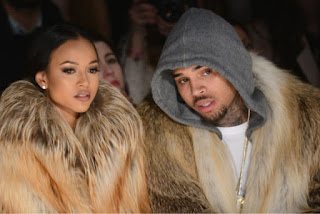 Chris Brown and ex-girlfriend Karrueche Tran argued on Instagram this past weekend. Chris Brown can't seem to stay away from social media, specifically, airing out his thoughts on personal matters via the public platform. After getting into an argument with former girlfriend Karrueche Tran in real life, they've since taken their arguments to social media. This is one incident in a long string of strange social media behavior from Brown, who last week caught flack for posting a photoshopped image of himself in a car with Suge Knight and Tupac, as well as a meme about Caitlyn Jenner. This time, Breezy decided to call out Karrueche for continuing to give interviews about their relationship in a comment on her Instagram page-- referring to one she did with Access Hollywood. Instead, the singer said she should be focusing on her own career. "Honestly, it’s so fucking pointless to keep doing interviews about me. Talk about your career…If there is no more relationship then u shouldn’t be doing fucking interviews with people," he wrote. Karrueche responded to the comment with a full Instagram post of her own, bringing up the fact that Brown's done similar interviews. "First off @chrisbrownofficial you just did an interview w Ryan Seacrest in which you spoke about me," she wrote on Instagram. "My interview w Access Hollywood was not entirely about you.. they asked a question and as a mature adult I answered. I'm not gonna shy away from something that I lived through. I'm talking about my life and experiences. I'm not speaking on you or bashing you (like I easily could). Don't be mad at me because our relationship is over due to your lack of loyalty. You know what's weak?? You forcing yourself into my car.. my broken window.. blowing up my phone.. trying to shower me w gifts.. Man the fuck up and change the bs in your life like I've told you several times. Since you want to hear about my career - check out @vanityseries every Thursday on StyleHaul.com.. Emmy winning @thebaytheseries this Sept and 3 Headed Shark Attack on SyFy next month. Best of luck to you and beautiful Royalty." Brown's response to this was more so an apology, as he wrote on an Instagram post, "I'm eternally thankful for you being in a part of my life. I've learned so much from you. I wish u nothing but happiness and the best. @karrueche all I was doing was trying to fight for the woman I love. ThanxI learned a lot." See all the back-and-forth in screenshots above. Do you think this'll be the end of it?