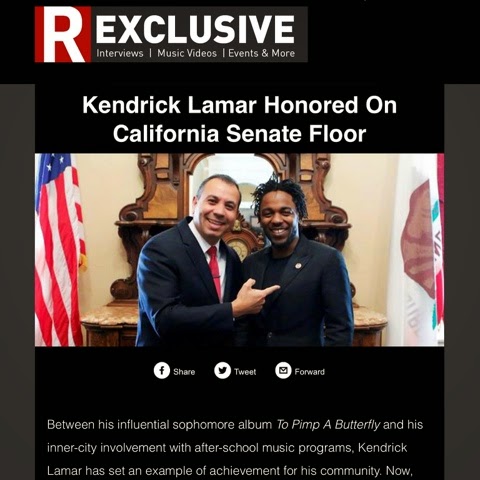 Between his influential sophomore album To Pimp a Butterfly and his inner-city involvement with after-school music programs, Kendrick Lamar has set an example of achievement for his community. Now, he's being recognized for his work as the TDE rapper was honored by California State Senator Isadore Hall III, who gave K.Dot the 35th Senate District's Generational Icon Award on the Golden State's Senate floor. Hall's district includes Compton, where the good kid grew up and consistently pays tribute to.

"In less than 10 years as a professional artist, Mr. Lamar has gone from a local Compton young boy to become a multiplatinum, Billboard chart-topping, two-time Grammy Award-winning musician, an incredible achievement for anyone 27 years old," Hall, who said he was also a Compton native, told the room. "But Mr. Lamar has not let his recent fame get the best of him. If you visit Compton, and I would encourage all of my colleagues to do so, Mr. Lamar is a familiar face in the neighborhood." Lamar then posed with his plaque and made a statement. "It's definitely an honor to be right here in front of you guys," he said. "Being from the City of Compton and knowing the parks that I played at and the neighborhoods, I always thought how great the opportunity would be to give back to my community off of what I do in music… I thank you from the bottom of my heart for honoring me today."

Congrats to the Compton kid. Watch the complete speech on #DisisHipHop.com #DIHH™